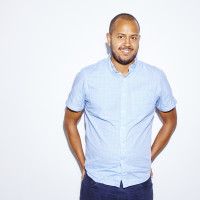 Stefon is a project designer at fsy and has been with the Firm since 2014. After receiving his Bachelor’s in Architecture from the University of Southern California’s School of Architecture in 2010, Stefon began a career in themed entertainment where he worked on movies such as ‘The Brass Teapot’ and ‘The Nevsky Prospect’ as a set designer and on themed entertainment projects as a Showset/CAD Designer.

In addition to being involved with the themed entertainment projects at fsy, Stefon has played an important role in the design of multi-unit housing projects and has been intently involved in the design and construction of the fsy offices. Here he handled a range of issues from sustainability to materials and methods, and is well versed in 3D rendering, Building Information Modeling and technology, and has a sound knowledge of the design process—from concept to construction.

Stefon is currently in the process of acquiring his architectural license.